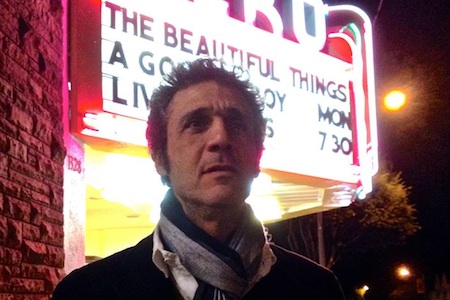 Long experienced Giovanni Piperno is one the most awarded and recognized documentary director in Italy.

Some of his most important Film

”It was an honor for me to accept the call from Stefano Rulli. The meeting with PerSo Film Festival amazing staff definitively convinced me to take this bet, with the aim of making this Festival one of the most important Documentary film Festival”

For the third year the Artistic Direction is entrusted to Giacomo Caldarelli and Ivan Frenguelli, founders and animators of an innovative project like PostModernissimo, from this year supported by Luca Ferretti, former coordinator and programmer of the PerSo Film Festival since its first edition.

“This year, at the 76th Venice Film Festival, Italy has won two awards, something that rarely happens in the big International Festivals. One went to the leading actor in a free and experimental film (Martin Eden) by a director – Pietro Marcello – which comes from the documentary, and the other is a special jury prize at Franco Maresco’s latest film; another author who has always tried his hand at the different aspects of the cinema of reality. In short, the cinema of reality in our country, in the face of an almost non-existent market, not only resists but continues to feed the most interesting authors internationally.

In our own small way, PerSo has always had, often also among the winners, films that experiment and cross languages ​​between writing, staging, sometimes animation, and reality, great narratives and minimalism. And also this year we are able to offer a selection, among unpublished international titles, Italian films, great films already awarded and short films, which allow us to recognize the fertility of documentary cinema, despite the fact that this fifth edition of PerSo has suffered from the crisis of the Region that supports always our Festival, and it has been realized – thanks to the effort and enthusiasm of a particularly close-knit team – with a third of the usual resources.”

PerSo Film Festival is organized by non-profit Foundation La Città del Sole ONLUS.
La Città del Sole ONLUS is a foundation created to build life paths for people with psychic and mental disabilities, who would otherwise be at great risk of institutionalization.
Since 1998, La Città del Sole ONLUS works in the city of Perugia in the health, socio-health and socio-cultural fields, carrying out innovative life projects directed to autonomy and integration for psychiatric patients.
You may wonder why a psychiatric and mental health Foundation feels the need to organize a Film Festival. In our opinion cultural activities are a complementary and meaningful part of our social and healthcare mission. In order to allow a perfect integration we have to take care not only of our patients’ life conditions, but also of the social context where they are living and the way of thinking diversity by the so-called ‘normal’