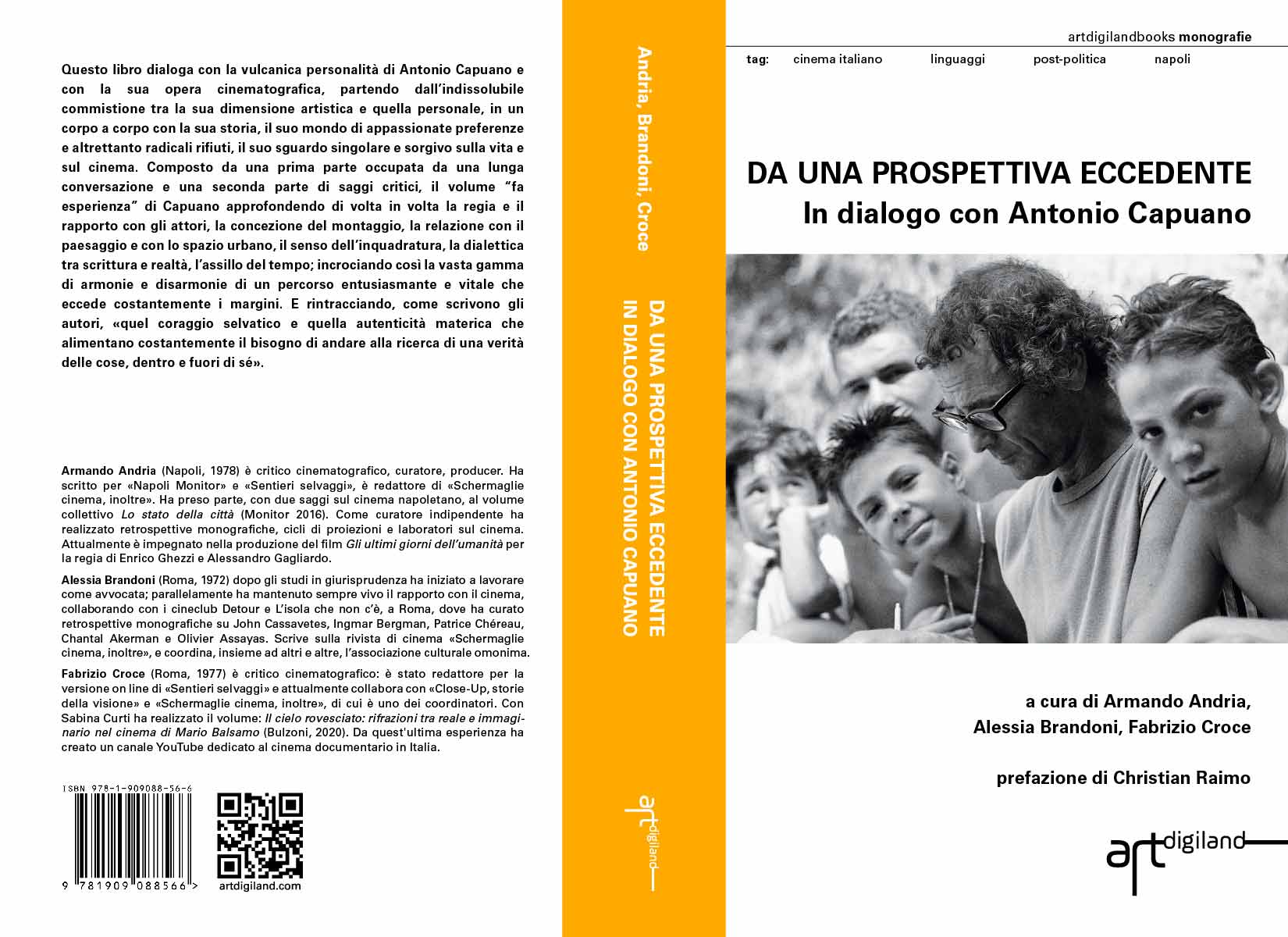 From the book “From an Excessive Perspective. In Dialogue with Antonio Capuano” (Artdigiland Editions), a master class on the Neapolitan director’s cinema conceived as a multi-voice conversation between the three authors of the volume (Armando Andria, Alessia Brandoni and Fabrizio Croce), Marco Grieco, protagonist of La guerra di Mario and Bagnoli Jungle, and Giovanni Piperno who will moderate the meeting.
The intent is for PerSo too to flourish the wide range of harmonies and disharmonies of an exciting and vital artistic and existential journey that constantly exceeds the margins. Downstream from the dialogues the authors had with Antonio Capuano, the volume experiences Capuano by delving from time to time into directing and the relationship with actors, the conception of editing, the relationship with landscape and urban space, the sense of framing, the dialectic between writing and experience, the wound of reality and the nagging of time.
The causes-in-common with Capuano are many as well as what remains, which is not exhausted in what has been and which, through the meeting at PerSo, will take a new form.
“Because contemporaneity is like that. While two are trying to understand, working for the meeting, there is the little boy who comes and turns the table over, you ask him why he does it and he just says, ‘Why not?’ This is something that leaves you dismayed, you wonder, What the fuck am I going to tell this guy now? The only thing he would understand would be if you slammed him with his head against the wall. The only possible language would be the language of violence. But can we give up the democratic relationship between us?”
“I like television to interfere; I like the audio of the TV to become louder than the voice, that you can’t understand what a character is saying because there is television looming, I just like it cinematically. This is a Godardian thing…. I remember a beautiful scene in a Godard film where there is the main character talking. At a certain moment there is an airplane and you can’t understand anything anymore, however, the frame always stays on her. Then the plane goes away and gradually you start to understand what she is saying again…. But who knows what the fuck she said as the plane went by! That’s the wonder.”
(Antonio Capuano, excerpt from the book)

ARMANDO ANDRIA
Armando Andria (Naples, 1978) is a film critic, editor, producer. He has written for “Napoli Monitor” and “Sentieri selvaggi,” and is editor of “Schermaglie cinema, furthermore.” He took part, with two essays on Neapolitan cinema, in the collective volume Lo stato della città (Monitor 2016). As an independent curator, he has produced monographic retrospectives, screening cycles and workshops on cinema. He is producer of the film Gli ultimi giorni dell’umanità, directed by Enrico Ghezzi and Alessandro Gagliardo, which was presented in the official selection at the 79th Venice Film Festival.

ALESSIA BRANDONI
Alessia Brandoni (Rome, 1972) after studying law began working as a lawyer, dealing in particular with copyright law, art law and archives; in parallel, she has always kept alive her relationship with cinema, collaborating with the Roman film clubs Detour and L’isola che non c’è. As an independent curator, she has organized monographic retrospectives on the cinema of John Cassavetes, Chantal Akerman and Olivier Assayas. She writes in the film magazine “Cinema Skirmishes, Also” and coordinates, along with others and others, the cultural association related to it. She has written about cinema in the weekly “Rinascita della sinistra.”

FABRIZIO CROCE
Fabrizio Croce (Rome, 1977) is a film critic: he was editor for the online version of Sentieri selvaggi and currently collaborates with “Close-Up, stories of vision” and “Schermaglie cinema, inoltre,” of which he is one of the coordinators. With Sabina Curti he has produced the volume: Il cielo rovesciato: rifrazioni tra reale e immagi-nario nel cinema di Mario Balsamo (Bulzoni, 2020). He is also involved in social work, working for years in the world of psychophysical distress also through art therapy and cinema.