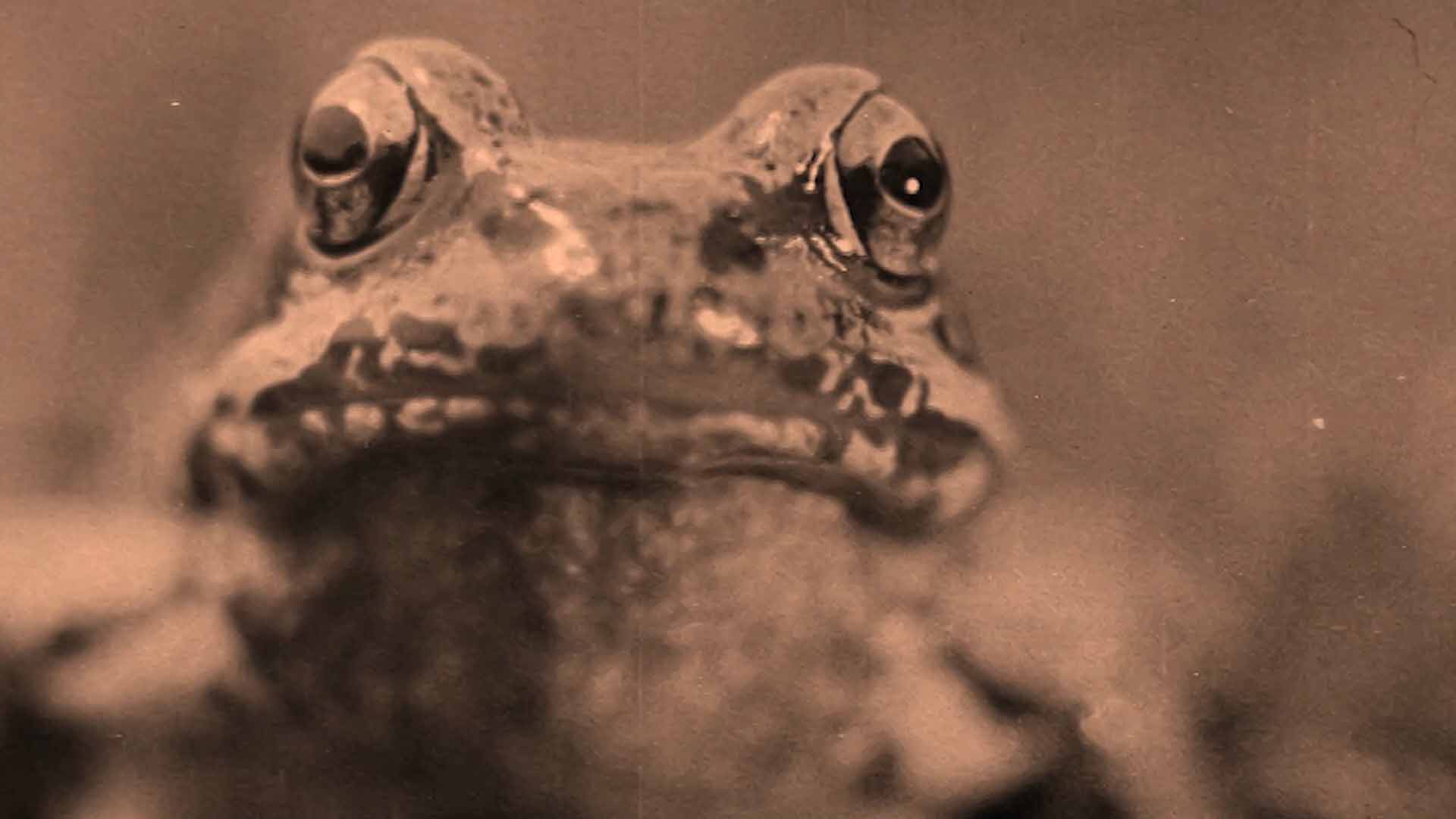 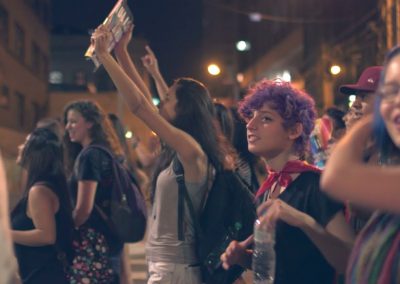 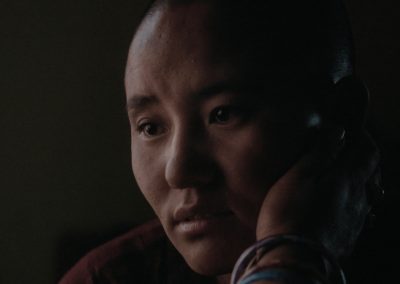 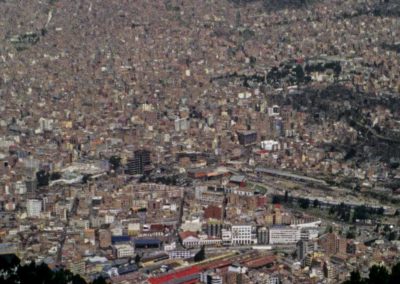 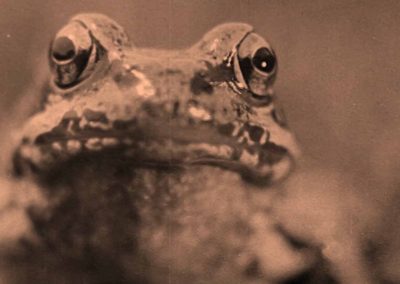 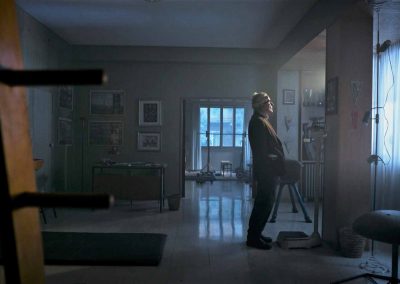 Dal pianeta degli umani (De la planete des humains) begins in the silence of the Ventimiglia border, between Italy and France, a border that is no longer talked about, with thousands of stranded migrants, and even worse, this silence, as if nothing has happened, nothing is happening. The film begins as an inspection and becomes a fantastic fairy tale, narrated by a choir of frogs. In this fairy tale, a scientist experiments with a rejuvenation cure with monkey testicles. Doctor Voronoff really existed, in the “roaring twenties” his fame was worldwide. Songs about him were sung at the Folies Bergères, in the Sambas of the Rio de Janeiro Carnival. Mikhail Bulgakov was inspired by him for the protagonist of Heart of a Dog. Mussolini wanted to “voronify” Italy. Then oblivion, as if he had never existed. As if he were the character of a fantastic film of the time, on the island of Docteur Moreau. His villa is there, over the border. The monkey cages are there, in the silence. In this silence, migrants do not exist – they cannot exist in the permanent vacation of the splendid Riviera on the Mediterranean. Everything is like in a fairy tale. Nothing has happened, nothing is happening. A fairy tale always begins with “once upon a time”. “Once upon a time” takes place in another time, not in the one we live in. The film is a fairy tale of the present, narrated by a choir of frogs. Frogs are everywhere and they are invisible, they are almost immortal. I listened to them, night after night, during the inspections.

I wanted to build the film as an inspection of the scene of some fantastic film, as if this border on the sea, these paths on the mountain, were an island abandoned by its inhabitants. There are traces to decipher, something has happened. In this scene there are water tanks, like metaphysical presences, and it is from the tanks that the frogs tell the story. The inspections are subjective, I am looking for traces of the enigma, traces of what remains of history, of what I can imagine. I try to imagine, to go beyond silence – to be able to look as if from another time, to look at the present as in an anticipation film. The film becomes a polyphony of times and spaces that emerge from the inspection. A work on archival images, films, current events of the time, photographs, which bring out the present as if it were seen from another era. So working visually on the layering of images, on their material itself, on the texture of Super 8 holiday films that becomes the texture of the images of the present, the overlap, the saturation – the image becomes a living material of time. In his subject he speaks of memory and oblivion, he tries to give life to ghosts. As in a fantastic film, it is a ghost film. The specter of Serge Voronoff, of his time, the ghosts of vacationers in holiday films, the ghosts of the present, vacationers and migrants. A film of ghosts because it is also a film about the other that cannot be seen, about the other that does not exist, an image that you look at but do not see. A film of ghosts and a polyphony of voices, times, spaces (the sea, the silence of the border), a polyphony with a choir of frogs and a narrator. The narrating voice is not the text on which the film was built, they are notes written during the editing of the film, like travel notes, in an imaginary dialogue with frogs. These notes have become almost like a song. 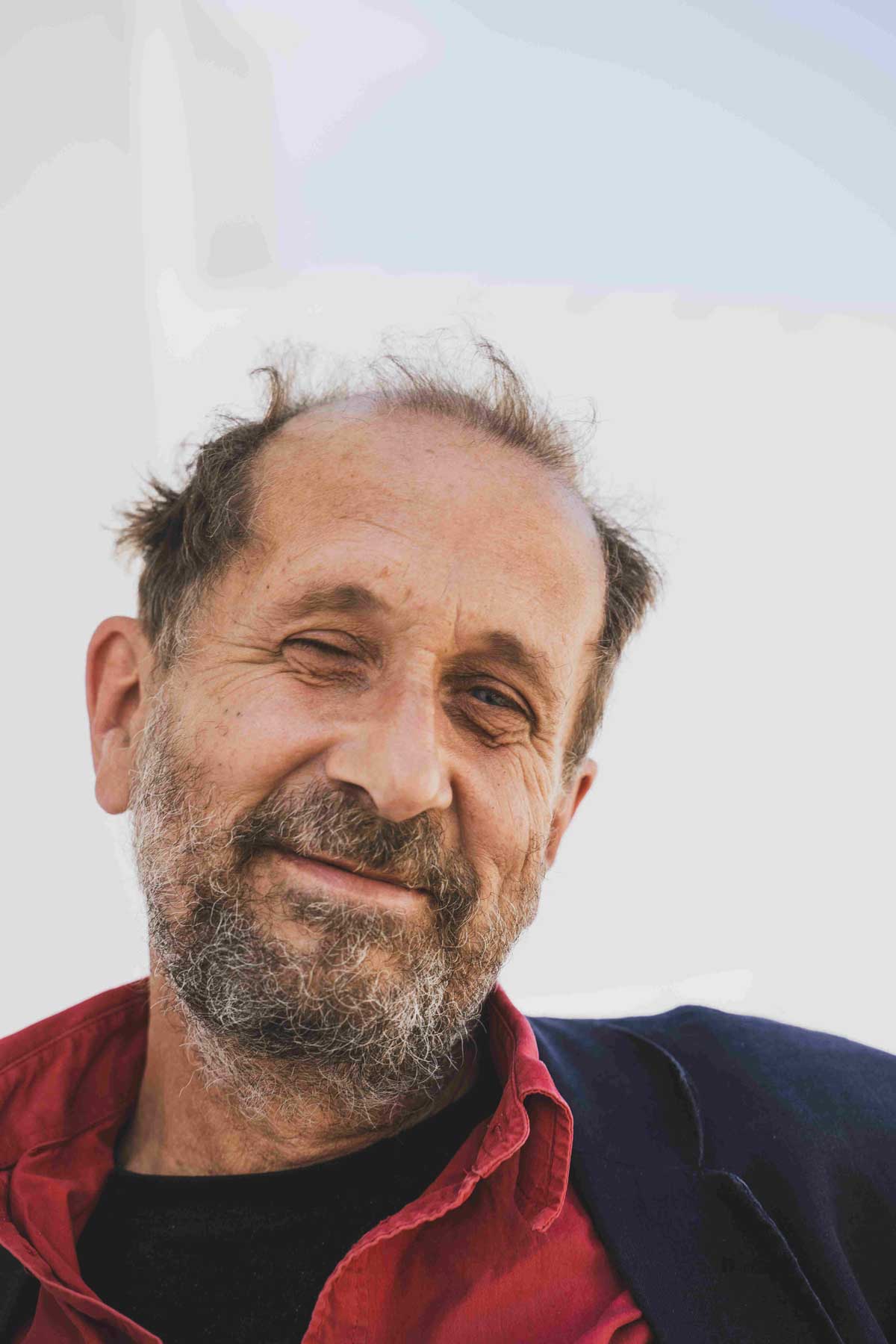 Born in Paris in 1962, he lived almost all his life in Brussels – where he was trained – and reappeared in the Mugello of his ancestors only a few years ago. Giovanni Cioni, although very Italian, brings with him a profoundly European look in each of his cinema acts. It will be this feature that will make his films so immediately appreciated in the rest of the world. Giovanni Cioni’s filmography, impressive for its vastness of themes and incisiveness, speaks for itself about the immense resonance of his work: starting from the most recent works, Non è sogno, premiered at Locarno 2019, official selection; Viaggio a Montevideo was selected among other festivals at Cinéma du Réel 2017 and at the 2017 Pesaro International New Cinema Festival; Dal ritorno has been selected in the international competition at Cinéma du Réel 2015, Biografilm Festival 2015, Filmmaker Festival 2015, Trieste Film Festival 2016; Per Ulisse, premiered at Visions du Réel 2013 (international competition), first prize in the international competition and Cinemaitaliano prize at the Festival dei Popoli 2013, special mention at the Cinema and human rights Festival 2013, selected at the États généraux du film documentaire 2013 in Lussas; Gli intrepidi, premiered at the Venice Days – 69th Venice Film Festival; In Purgatorio, selected and awarded in various festivals (including the Festival dei Popoli, Bellaria and Cinéma du Réel), distributed in theaters in Belgium and France. Giovanni Cioni also carries out workshops in schools and universities both in Italy and abroad. Several retrospectives have been dedicated to his work including those organized by Visions du Réel – Nyon, April 2011 – and Annécy Cinéma Italien – 2019.